My most memorable moment of 6th grade was when Lyndi, Alexis, Sydney and I put up the little posters on everyone’s lockers. It was really funny because we taped Kyle’s locker handle and put layers of tape over 1 poster on his locker! Also we put posters all over Kori and Molly’s lockers.

My time machine would look like a small airplane, but without the wings. It would have huge glass windows on both sides. In the back of the time machine would be a bright lemon colored clock with many hands on it. In it would be fluffy bean bag chairs. The paint on the outside is a sparkling red and the inside is a brilliant shade of purple. It would also have buttons in the front that you could punch in the time period that you wanted to go to.

Traveling to the future:

– Describe what you think the world would look like? I tink that the world would be very technological and the buildings would probabluy unimaginable! But I would wonder if the big cities like Chicago and New York would be there or if there were new ones.

– Do you think our current governmental system would still be in place? I think that the government would probably be different in the future. 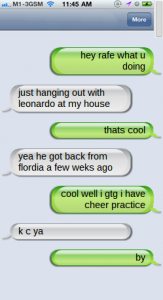 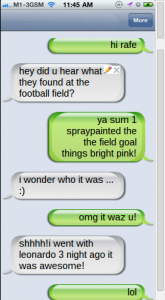 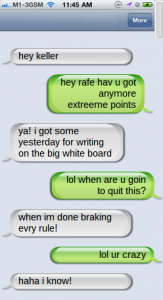 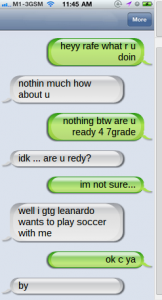 One day, DeSuMaKe was riding her bike. All a sudden she hit a rock and fell off, thankfully she did not get hurt. The next day she was riding her bike then she hit the same rock and fell off again but this time she got hurt really bad and a girl named Jane saw her fall. Jane was a 6th grader just like DeSuMaKe.She made fun of everyone no matter what they done. DeSuMaKe was crying her eyes out when she fell, Jane made fun of her. The next day at school she started making fun of her at school. This caused many problems with DeSuMaKes life. Finally stood up to Jane and Jane was shocked and never messed with DeSuMaKe never again.

Welcome to Kentoncityschools.org. This is your first post. Edit or delete it, then start blogging!